Jack Reacher: The return of an 80’s icon?

Jack Reacher: The return of an 80’s icon? 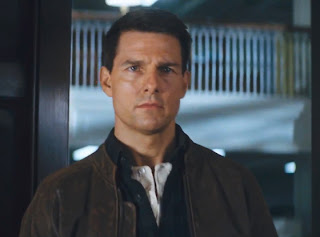 Director Christopher McQuarrie recently brought Lee Childs’s Jack Reacher to the big screen and portrayed him, faithfully, as a man who has chosen to live on the edge of society. He avoids the internet, mobile phones and electronic bank accounts. He also prefers public transport, motels and grubby diners to any semblance of a settled lifestyle. As a hero he might lack the keyboard skills of Jason Bourne and the dress sense of a latter day James Bond but he has all  the charm of Thomas Magnum, all the lethal skills of Kane, from Kung Fu and all the anonymity of David Banner. Combine this with an ability to drive a dodge charger recklessly, sense a tail and handle assault by multiple goons, and you have the sort of action hero we haven’t seen since the days of John McLean.

Even the film’s villains, a group of  crooked property developers, have a reassuringly 80’s feel. They are the sort of ruthless and uncomplicated adversaries that Hannibal Smith or Michael Knight might have encountered in a small, dusty town in America’s midwest rather than some shadowy government agency, or syndicate of high tech operatives out to crash the internet.

However, Reacher’s  chosen lifestyle, that of rootless drifter, with his scant possessions and reluctance to form attachments does make him seem out of place at times and leads Public Defender Helen Rodin to ask, ‘You don’t live in the real world at all, do you?’

Whether he does or not, Jack Reacher is arguably a tougher adversary in ‘the real world’ than he would have been in the pre-digital one he seems to belong to. After all, the avenues of research that the police resort to nowadays are useless in the hunt for a man with no social media profile, no hotmail account, no smartphone, no images posted on instagram and whose only weaknesses appear to be leather bomber jackets, muscle cars and loose women.

And yet, he can read people with an easy assurance that twitchy Jack Bauer would have died for, he has the old fashioned detective skills we never see on CSI, and he can kick butt as well as any of the  legions  of shallow vigilante/mercenary/ex-soldiers played by the likes of Jason Statham, Mark Whalberg or Tom Hardy.

Jack Reacher, for me, represents the welcome, and long overdue return of an 80’s action adventure icon, that of the lone traveller whose highly developed sense of right and wrong outweighs his need for anonymity. A man who will come out of the shadows to fight for the underdog and who, when justice has been served, will quietly move on.

It’s certainly worked out better than Sylvester Stallone’s recent attempt to recreate another iconic 80’s figure, that of the muscle bound, gun toting mercenary who recently returned to the big screen with ‘The Expendables’ and its sequel, both of which looked more like a flimsy pretext for a reunion gig than an attempt to recreate an iconic species of action hero.
Posted by Tom Gold at 06:14