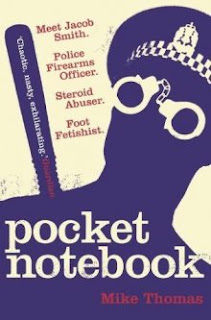 PC Jake Smith is about to bring a whole new meaning to Zero Tolerance. Outwardly he is the copper’s copper, a second generation police officer and a member of the elite armed response unit. The implacable enemy of lager louts, he bristles with state of the art tactical equipment, he can bench over a hundred kg without breaking sweat and can read the street like a map.

But, after fifteen years he is angry. Angry at the leniency shown to repeat offenders, at the beurocracy of the modern force and its stifling political correctness and angry at the steady and irreparable breakdown of his marriage.

His body courses with steroids while his mind begins to blur the line between his role as entry man for the firearms unit, his playstation and his collection of Vietnam DVDs.

Its all about to go horribly wrong...

Pocket Notebook brings together the tactical fluency of Andy McNabb with the spiraling maddness of Bad Lieutenant  and the hopelessness of Generation X with the quirky Cameraderie of End of Watch. Shotguns, steroids, hookers, bleeding knuckles and white hot rage. PC Smith has the road to hell in front of him and we are all along for the ride.