Swimming with sharks and why some books should never go 'e'. 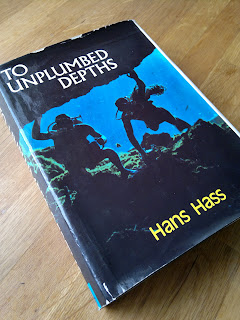 I thought I was a bona fide ebook convert, in fact I was actually starting to enjoy using phrases like ‘redundant format ’ and ‘digital revolution’.
Then on Tuesday an old friend gave me a copy of To Unplumbed Depths written by early scuba pioneer Hans Hass.

It was published in 1972 and is packed with hundreds of beautiful colour pictures from 35 years of diving in exotic locations all over the world. It’s a fascinating insight not only into the birth of scuba diving but also into the way our oceans used to be not so long ago.
I’d convinced myself that printed text, whether it be on the screen of my kindle, or bound in calf skin is still just a barcode that doesn’t become a story until its processed by my brain but this second hand book has made me reconsider.
Even though I know that an ipad can faithfully reproduce all the information in Unplumbed Depths, I cant help feeling that in this case the additional functionality and portability is less not more.
Here, beside me, is the original version that Hass himself approved and as he stares out boldly from the dust jacket, fists on hips, I’m reminded that although he revolutionised the way people dive he probably didn’t think the same needed to be done for the way they read.
Letting the pages flutter past my thumb I have to agree. They have a sweet, slightly musty smell and the numerous photos are printed on paper that feels  as smooth as water. The pictures themselves have a rich colour and grainy quality I remember from my dad’s old National Geographic magazines.
It compliments the subject matter beautifully; stunning seascapes and marine wildlife juxtaposed with gleaming, mid 20th century technology and a cast of characters who look as if they’ve stepped straight off the set of an early Bond movie. Then there are Hass’s descriptions, vivid yet at times dispassionate:
‘We accompanied whale hunters and succeeded in filming sperm whales under water including the final struggle and death throes of a harpooned specimen. On that occasion we heard the shriek of the sperm whale: it is reminiscent of the creak of an old barn door.’
Cumulatively, the experience is of an artefact from a bygone era, lovingly crafted by a man who swam with sharks wearing trunks, fins and an oval mask and who believed that the best way to discourage them from eating him was to shout underwater in his guttural Austrian accent.
If I ever read the Girl With The Dragon Tattoo it will be on my Kindle because I’m confident that Larson’s work will survive the translation to digital format but if I’m going to get the most out of Unplumbed Depths it will be by reading it the way Hans Hass intended me to.


Here's Julie Bosman of the New York Times talking about the difference a well made hardback can have in a crowded market.

Finally, here's a great piece by Nick Duerden of the Independant on why designers and graphic artists are helping to keep traditionally published books at the forefront of the industry.