Why I go to Frankie and Bennys 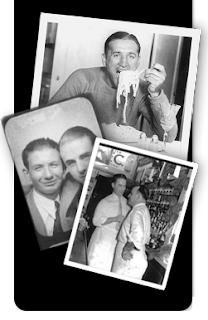 In 1924, at the age of 10, Frankie left Sicily with his parents and moved to “Little Italy” in New York. Within a year of moving, the family had opened a restaurant, which is now co-managed by Frankie's long-time friend Benny. The business was taken over by Frankie and Benny in 1953, and combines popular American food with traditional Italian dishes. Or so the story goes.

In reality it was not started by Frankie and Benny and it cannot trace its lineage back to New York in the 1920’s either. Even my four year old son Nicholas knows this isn’t a real Italian restaurant.

The  last time we went the food wasn’t that bad though, they do a pretty decent cup of coffee too and if going there doesn’t exactly make me feel as if I’m walking to onto the set of Goodfellas, well, Brewers Fair (which is just across the car park) doesn’t exactly make me feel like Laurie Lee in Cider with Rosie either, afterall, this is Strathkelvin Retail Park.
I ordered Spaghetti Bolognaise cooked to ‘Cousin Mario's Italian recipe’ but I know he doesn’t work there just like I know that the smiling men in aprons whose photos line the walls have absolutely no connection with the place either.
That said, you've got to wonder what they'd make of sister Rosaria’s Lamb Shank or what they’d have actually done to Cousin Mario if he’d served up his so called ‘Italian recipe’ back in the old neighbourhood.
But since authenticity isn’t what I’m looking for, I don’t have to waste any time soaking up atmosphere when I could be getting home for the start of Burn Notice or making sure we’re away before the Saturday football traffic on the M9.
Frankie and Bennys is convenient, no doubt about that, but it always gives me a curious sense of  déjà vu, and not because I’m wondering when I was last here. Instead I’m wondering what I’m doing here now, a dilemma best reflected in the unspoken understanding between me and the guy who shows us to our table.
He’ll ask me if I’m enjoying my ‘Uncle Luigi’s meatballs’ and I’ll say ‘Yes, just great thanks.’ Because even though we both know they are rubbery and served in a tasteless sauce we also both know that if I complain and insist on something else I’ll be stuck here another hour while my kids go buck and then we’ll end up missing the start of the movie as well.
As he swipes my card I promise myself this is the last time I’ll come here but we both know that isn’t true either, because there’s nowhere else I can park this close and be in and out inside an hour. Which, incidentally is also why we both know that I can forget trying the little place just off Argyll St. that does really good Italian food.
Finally of course, we both know that Frankie and Bennys is not real Italian food but any complaint based on this observation would be like going to Disneyland and demanding to see the real Mickey Mouse, because that way lies maddness.

Alessia Horwich is a freelance food and travel journalist who is always on the lookout for somewhere new, check out her take on chain restaurants here.

Sid in his Liverpool Food Blog gives his reasons for avoiding them but says don't knock them either.

Lastly here's Jamie Oliver getting yet another bashing, this time over his chain of Italian restaurant's 'Jamie's Italian.'